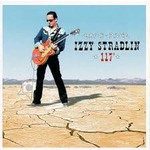 117 Degrees (1998) is the second studio album by former Guns N' Roses guitarist Izzy Stradlin, and his first musical work not released under a band name. The album picks up right where The Ju Ju Hounds left off, offering a set of 14 bluesy hard rockers in the vein of Chuck Berry, the Stones, the Faces, Aerosmith, and Guns N'Roses.