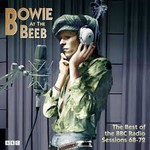 Bowie At The Beeb is a four-disc vinyl box set, which was previously released on CD in 2000. This is the debut of the Best Of David's Bowie's BBC radio sessions from 1968 - 1972 on vinyl. The set comes in a lift off lid box and features a full colour 20 page booklet.
This vinyl version features Oh! You Pretty Things from a Sounds Of The 70's: Bob Harris session broadcast in September 1971 which was previously exclusive to the Japanese release of the CD. This performance features just David and Mick Ronson as a duo. Completely exclusive to the set, and therefore making it's debut, is the once lost The Supermen from Sounds Of The 70's: Andy Ferris session broadcast in March, 1970 and performed by The Hype.