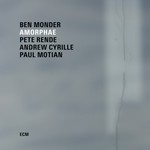 Guitarist Ben Monder first recorded for ECM as a member of the Paul Motian Band on "Garden of Eden" in 2004, and Amorphae was originally conceived as a series of duets for Ben and Paul. A first exploratory duo session was recorded in 2010. After Motian's death the following year it was decided to expand and complete the project with another highly influential and innovative drummer, Andrew Cyrille, adding also Pete Rende on synthesizer on two pieces. So here we hear Monder solo, in duo with Motian, in duo with Cyrille, and in trio with Cyrille and Rende. This range of expressive options casts light upon Monder's musical concepts and their adaptability. A guitarist's guitarist, Monder's also a master of texture and unusual voicings, creating what one reviewer has called "detailed sonic landscapes of mystery and power". All the music on Amorphae is his, apart from "Oh, What a Beautiful Mornin'", the Rodgers & Hammerstein chestnut from the musical Oklahoma!, performed here by Monder and Motian.