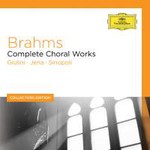 Both the unaccompanied choral music - motets, part-songs, canons and folksong settings - and the choral works with orchestra, including the German Requiem, are offered in this set. The North German Radio chorus under Günther Jena "gives radiant performances, beautifully recorded … Highly recommended" (The Penguin Guide). Giulini's German Requiem is "deeply dedicated" and there is "incandescent singing from the Czech Philharmonic Chorus" (The Penguin Guide) in the rare choral works conducted by Giuseppe Sinopoli.

"Carlo Maria Giulini is always worth hearing in Brahms -- and in much else . . . ["Ein deutsches Requiem"]: The orchestral contribution is excellent . . . Giulini conducts with distinction and dedication. His is a deeply considered reading but the drama comes out too . . . The "Op 17 Gesänge" for female voices feature a most unusual and effective accompaniment by a harp and two horns; they're delightful and the present performances are excellent. So too are the accounts of two late sets of pieces, the "Fest- und Gedenksprüche" and the"'Op 110 Motets" . . . It's all extremely well-crafted and it all has a role in widening our appreciation of Brahms . . . This is a valuable collection and the Giulini and Sinopoli performances of the major works are all well worth hearing. The sound is consistently good." MusicWeb International April 2015

" [Giulini conducting "A German Requiem" is a live performance] that emphasises the work's serenity and spirituality over its drama, though it's by no means lacking in spine. Giulini's two soloists, Andreas Schmidt and Barbara Bonney, are on fine form . . . I particularly like Schmidt's approach which seems to admit a slight vulnerability, a very human response. The Vienna State Opera Chorus sing with fine, focused tone and the Vienna Philharmonic play with great beauty . . . [Sinopoli's recordings] are very fine and alive to the drama of much of this music. Brigitte Fassbaender is magnificent in the "Alto Rhapsody" and René Kollo makes a strong impression in "Rinaldo" (Sinopoli's orchestral support is superb here). And the "Triumphlied", with Wolfgang Brendel, is full of fire and majesty . . . [the NDR Chorus under its conductor Günter Jena] sing with firm, focused tone . . . The four Gesänge, Op 17, scored for female chorus, two horns and harp, are truly magical: the combination of sonorities is quite ravishing and the recording beautifully balanced to ensure a true sense of perspective . . . [these discs make for wonderful listening], and it's hard to imagine them better done. This is music that rounds out a portrait of the composer in a very special way." Gramophone April 2015