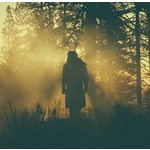 Thundercat
The Beyond / Where Giants Roam EP (12" EP)

Virtuoso bassist and singer-songwriter Stephen Bruner aka Thundercat returns to the Brainfeeder fold with his first solo material in two years, having already made outstanding contributions to not one, but two, of the greatest albums of 2015 - To Pimp a Butterfly and The Epic - by fellow Los Angelians Kendrick Lamar and Kamasi Washington. Mini-album The Beyond / Where the Giants Roam picks up where 2013's Apocalypse left off, with Thundercat joined on production duties by longtime sparring partner Flying Lotus for six spiralling excursions to the outer limits of jazz-funk.

The legendary Herbie Hancock pops up on keyboards on 'Lone Wolf & Cub' and there are contributions from fellow Brainfeeder family members Kamasi Washington, Miguel Atwood-Ferguson and Mono/Poly.

Side BL
1. Lone Wolf and Cub
2. That Moment
3. Where the Giants Roam / Field of the Nephilim