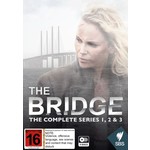 A tale of darkness.

Series 1:
A body is found in the middle of the Øresund Bridge between Sweden and Denmark; half of it belongs to a Swedish politician and the other half to a Danish prostitute. A bi-national team is put together to solve the crime, whose perpetrator claims to be a "moral terrorist."

Series 2:
Series 2 begins thirteen months after the events in Series 1, where a coastal tanker leaves the Öresund waterway and is headed straight for the Øresund Bridge. When the Coast Guard board the ship they discover there is no crew, and three Swedish and two Danish youths are chained below deck. It all turns into a race against the clock to prevent a disaster where many lives are at stake...

Series 3:
When Helle Anker, the founder of the first gender-neutral kindergarten in Copenhagen and a high-profile debater on gender issues, is found murdered in Sweden, the Danish and Swedish police are compelled to join forces once more for a third series of The Bridge. The brutal killing turns out to be only the first in a series of gruesome crimes, strung together in a case which involves Saga Norén of the Malmo police personally, and which will change her forever.