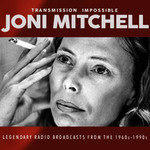 This three CD boxed set features a number of live recordings of Joni from concerts and sessions recorded for FM Broadcast in the 1960s, 70s, 80s and 90s.

Starting with a number of live cuts from shows she performed in the mid to late 1960s, her full set from the Newport Folk Festival in 1968, and a couple more cuts recorded in the early 1970s, Disc One provides an excellent introduction to the girl's live material from that early era.

Moving on to Disc Two we are now in the early 1980s. This, of course, does not infer that Joni's 1970s work should be glossed over, and indeed anyone who knows anything about the lady would be aware this was her golden decade. However, there is a notable shortage of good quality recordings of previously unreleased live performances in existence from this era. So, back to 1983 and we find Joni in concert in the Netherlands performing an excellent set of songs, new and old, six or so months after the release of her first
album of the decade, the often under-appreciated but nevertheless superb, Wild Things Run Fast.

Disc Three concludes the set and jumps forward another decade, bizarrely catching Joni playing at the Gene Autry Museum in LA. Performing a marvellous set, albeit one replete with any number of cowboy jokes and stories between numbers, this '95 gig proves that Mitchell had lost none of the old magic, even after a full 30 years in the game!

Queen At the Table
more suggestions…