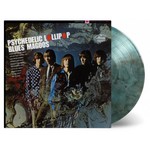 Psychedelic Lollipop (1966) is the debut album by the Garage Rock band Blues Magoos. This was one of the first albums to have the word "psychedelic" on the sleeve. The reference of the title is to LSD which was obscure enough to be legal in most of the United States.

Their single "(We Ain't Got) Nothin' Yet" was their most successful effort, rising into the Top 10 on many national charts. It peaked on #5 in The Billboard Hot 100. However, this was not the only exciting song. "Tobacco Road" features some great guitar work.

The covers on the album are chosen and played well which show the band knew their way around Rock & Roll, R&B, and Blues. Psychedelic Lollipop is an album based on creative ideas and talent.