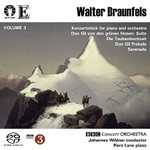 Dutton Epoch's first two volumes of music by Walter Braunfels were a revelation to many to whom the composer was just a name. This third volume concentrates on music written between 1910 and 1946. It is surprising that the glorious four-movement Serenade is not a regular repertoire work for it is a memorable discovery, reflecting as it does a pre-First World War innocence. Braunfels's opera Die Vögel (The Birds) was his first great success after the war; the interlude Die Taubenhochzeit (The Doves' Wedding) makes an appealing encore. The Prelude from another of Braunfels's operas, Don Gil von den grünen Hosen (Don Gil of the Green Breeches), launches this programme in ringing Straussian terms, while the Dances and Tunes suite from the same opera is delightfully lyrical. In 1946, Braunfels wrote the Konzertstück in C sharp minor for piano and orchestra, in which pianist Piers Lane is a sparkling soloist.