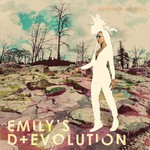 Emily's D+Evolution is a new artistic vision for the 4-time GRAMMY winner, an electrifying take on the power trio adorned with backup singers, touches of synthesizer and spoken word, "as if to fly the pirate flag of the Black Rock Coalition" says the NY Times in a rave review of a recent performance. "If she decided to make art-rock a full-time passion, she could give St. Vincent or Dirty Projectors some serious competition," says Rolling Stone. The new project was revealed via early appearances in front of a capacity crowd at Brooklyn's Prospect Park Bandshell, the Essence Festival in New Orleans and multiple sold-out shows.