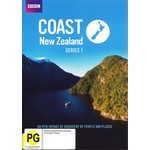 One of the world's greatest coasts revealed. Following the success of Coast and Coast Australia, the Coast format comes to one of the most beautiful coastlines on the planet. Acclaimed historian Neil Oliver is joined by a team of local experts to celebrate New Zealand's unique history, people, archaeology, geography and wildlife in this stunning new series. Shot with the trademark Coast award-winning cinematography, this series transports viewers to a picturesque paradise. With a wealth of intriguing tales and inspiring locations to draw from, this is a fun and informative tour of a remarkable coastline.

Traveling from Milford Sound to the Bay of Islands, and from the West Coast to the East Coast, Coast New Zealand profiles compelling characters and unearths fascinating facts.