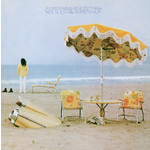 Neil Young
On The Beach (LP)

'On The Beach' is the fifth studio album by Neil Young, released in 1974. The release was defined by critics as an album where Young "was saying goodbye to despair, not being overwhelmed by it."
Though not a commercial success at the time of release, it has over time attained a high regard from fans and critics alike. The album was recorded utilising a variety of session musicians.
Young would opt for rough, monitor mixes of songs rather than polished sound, complementing the bluesy, meditative mood of the album; particularly the second half of the LP.

SIDE A
1. Walk On
2. See The Sky About To Rain
3. Revolution Blues
4. For The Turnstiles
5. Vampire Blues

SIDE B
1. On The Beach
2. Motion Pictures
3. Ambulance Blues