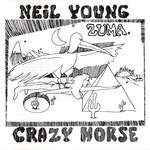 'Zuma' is the seventh studio album by Canadian musician Neil Young, released in 1975. Co-credited to Crazy Horse, it includes "Cortez the Killer," one of Young's best-known songs. Neil Yong wrote most of the songs in Zuma during his time living on Seal Level Drive in Malibu, California.