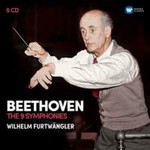 Beethoven was Wilhelm Furtwängler's guiding musical force. In his interpretations of the symphonies, the conductor generates irresistible dramatic momentum - and a constant sense of imaginative freshness - through the interrelationship of form, harmony, texture, rhythm and tempo. These recordings, all made in the late 1940s and early 1950s, in the Musikverein in Vienna and at concerts in London, Bayreuth and Stockholm, were newly remastered in 2010, bringing their sound more alive than ever before.