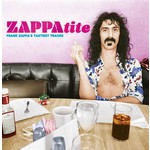 Zappa was an American musician, songwriter, composer, guitarist, record producer, actor and filmmaker. In a career spanning more than 30 years, Zappa composed rock, jazz, jazz fusion, orchestral and musique concrète works, and produced almost all of the 60-plus albums that he released with his band the Mothers of Invention and as a solo artist. He also directed feature-length films and music videos, and designed album covers.

As a self-taught composer and performer, Zappa's diverse musical influences led him to create music that was often difficult to categorize. While in his teens, he acquired a taste for 20th-century classical composers such as Edgard Varèse, Igor Stravinsky, and Anton Webern, along with 1950s rhythm and blues music. During Zappa's lifetime, he was a highly productive and prolific artist, earning widespread acclaim from critics and fellow musicians. He had commercial success, particularly in Europe, and worked as an independent artist for most of his career. He remains a major influence on musicians and composers.