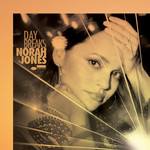 This is Norah Jones' stunning sixth solo album which is a kindred spirit to the singer's breakout debut Come Away With Me and finds the 9-time Grammy winner returning to the piano and her roots. The album features jazz luminaries including her Blue Note label mates saxophonist Wayne Shorter, organist Dr. Lonnie Smith, and drummer Brian Blade on a 12-song set that presents 9 new originals alongside covers of songs by Horace Silver, Duke Ellington and Neil Young.

"This new album feels full circle because I'm going back to my early influences," says Norah. "After the first record, I drifted away from the piano a little bit. I still played it, but was more inspired to write on guitar. I really loved playing piano on this record."