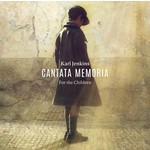 'Cantata Memoria' commemorates through new music the Aberfan tragedy of 21 October 1966, when 116 children and 28 adults tragically lost their lives. The Aberfan disaster was the catastrophic collapse of a colliery spoil tip in the Welsh village of Aberfan, near Merthyr Tydfil. The collapse was caused by the build-up of water in the accumulated rock and shale tip, which suddenly slid downhill in the form of slurry.

This large-scale choral work - in English, Welsh and Latin - has been commissioned by S4C, the Welsh language TV channel, to mark the 50th anniversary of what has become known to subsequent generations - both in the UK and around the world - as the Aberfan Disaster.

In the first large-scale works since the best-selling "The Armed Man - A mass for Peace", this special and profoundly emotional new work features no one less than the celebrated welsh bass-baritone Bryn Terfel, as well as leading Welsh harpist Catrin Finch, and a host of children and adult voices.

Though written to commemorate a specific and profoundly sad event, the emotions and themes housed within this special music can resonate beyond: Loss, then the transition from darkness into light are truly universal occurrences.