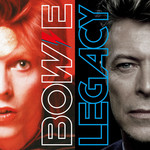 DAVID BOWIE LEGACY collects together some Bowie's finest singles from his first hit, 1969's 'Space Oddity' through to the singles 'Lazarus' and 'I Can't Give Everything Away' from earlier this year.

This album features a previously unreleased version of the classic 1971 single 'Life On Mars?', which is mixed by its original producer Ken Scott.
In over fifty years from his very first recordings right through to his last album BLACKSTAR, David Bowie was at the vanguard of contemporary culture as a musician, artist, icon and a constant influence on generations of writers, artists and designers. He was, and remains to be, a unique presence in contemporary culture.

David Bowie left a legacy of inspiration in every discipline from art to fashion, to acting and beyond, but it is for the ground-breaking music that he will mostly be remembered.

DAVID BOWIE LEGACY is an introduction to a whole world of music that is just waiting to be rediscovered by a whole new generation.