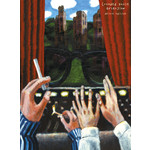 Each of Crowded House's six studio albums (and 1999's rarities album 'Afterglow') are now available as deluxe editions. Each body of work is expanded to include previously unreleased studio recordings, home demos, live tracks, b-sides and other rarities. The albums will be presented in 'fan-deluxe' format (slipcase, 4 panel flexitray), housing the discs and a beautiful 36 page book.