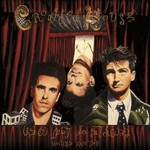 Following the success of Crowded House's debut and the band's grueling promotion schedule, Neil Finn was clearly showing signs that he was no longer happy being New Zealand's zany ambassador to the U.S. While the material on Temple of Low Men demonstrates great leaps in quality over its predecessor, it is a darkly difficult album, especially for those expecting Crowded House, Pt. 2 -- in short, there are no immediately accessible singles. Instead, Finn digs into the depths of his emotional psyche with obsessive detail, crafting a set of intense, personal songs that range from the all-too-intimate look at infidelity of "Into Temptation" to the raucous exorcism of "Kill Eye." Through all of this introspective soul-searching, Finn reveals most of all his true mastery of melody.

Side 1:
I Feel Possessed
Kill Eye
Into Temptation
Mansion In The Slums
When You Come

Side 2:
Never Be The Same
Love This Life
Sister Madly
In The Lowlands
Better Be Home Soon