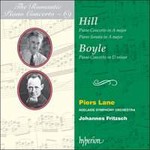 Alfred Hill and George Boyle enjoyed distinguished careers in their native Australia and abroadBoyle's students in New York included Copland and Barberthough both are all-too-little known today. The piano concerto and sonata by Hillthe 'grand old man' of Australian musical life at the timeare effectively the same work, the one an orchestral expansion of the other.

"The Boyle concerto is the stand-out here-compensating for its rather bland companion-and this is a very welcome addition to the Romantic Piano Concerto series." (MusicWeb Dec 2016)

"an intriguing disc of Australian examples, Piers Lane making a convincing case for his countrymen's music. Alfred Hill's 1941 concerto has a breezy, sunny disposition, with hardly a dark cloud in the sky…[Boyle's is] altogether graver than Hill's [and] has a final movement to rival anything coming out of Europe at the time." The Observer, 23rd October 2016 ****

"One cannot imagine a more persuasive, artful advocate of the music of his two compatriots than Piers Lane who, frankly, is worth hearing in whatever he plays" Gramophone Magazine, November 2016

"The centrepiece is Boyle's Concerto in D minor. Composed in 1911, making it arguably the first significant such work by an Australian, it is unabashedly romantic, with orchestral writing of considerable character that feels both ripe and robust, and a particularly thoughtful piano line…Piers Lane and the Adelaide Symphony play with conviction and make a persuasive case for the Boyle if not for the Hill." Classical Ear, December 2016 ***

Hill, Alfred:
Piano Concerto in A major
Piano Sonata in A major