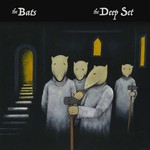 The Bats
The Deep Set

Five years after the release of their last critically acclaimed album, The Bats return with album number nine, The Deep Set (out January 27 on Flying Nun). With the title conveying the long established and firmly embedded, it's notable that it's 30 years since The Bats began recording their debut album in the living room studio of a friend of a friend in Glasgow. This time around they recorded in The Sitting Room, the studio-sleep out-garage next to Ben Edward's house in Lyttelton, New Zealand; following in the footsteps of Marlon Williams, Nadia Reid, Aldous Harding and many others.

With Ben Edward's help, The Deep Set continues The Bats' 21st century resurgence. Yes, this is The Bats, so the chords still chug, the guitars chime, ring, and jangle, the melodies are clear and memorable, the rhythm section is unstoppable. But the band mines the darker, deeper sound that 2011's Free All the Monsters revealed.

The songs remain reflective but that oft-expected sweet folksiness pops up less frequently. As the title suggests the music is richer, expansive, deeper. In their fourth decade as a band familiarity has come to mean a more careful treatment of each song. Is it maturity? It definitely translates into more depth and complexity but hey the songs are still as catchy as hell. And as a lyricist, Robert Scott continues his mastery of the personal and pastoral, the landscape and longing.

As always the key to The Bats is the emotion that their (seemingly) simple songs carry. They continue to mine that Mainland melancholy; the kind that somehow never risks being depressing. But of course that means there is lament and nostalgia, even if it's only for last night.

Taking us from the sun of Otago's Taieri River to darkest Durkestan and ending in the midst of contemporary New Zealand politics, The Deep Set continues the composed confidence of their recent albums with one of The Bats' strongest sets of songs, fueled by ever-more powerful guitars. If you grew up with The Bats their early recordings will always pull at your emotions but while less vulnerable and immediate than on their classic debut album, The Bats of the 21st century somehow manage to be more intimate and urgent.