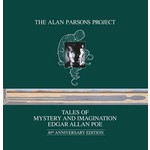 Tales of Mystery and Imagination was released in 1976, and consists of eleven tracks based on the works of the great American gothicist Edgar Allan Poe, and was the debut album of the Alan Parsons Project. It is an album remarkable in its ambition and execution, and in its uniqueness, as Alan Parsons, previously known as an engineer and producer, orchestrated a band with an ever-changing line-up, with himself and other Project full timer, Eric Woolfson, as auteurs.

This beautiful 40th anniversary box set, made with the full co-operation of Eric Woolfson's family and Alan Parsons, is a landmark release for the album that launched the Project.

•The original vinyl album has been half-speed mastered on two 45rpm 12" 180gm discs by Miles Showell at the studio where it all began, Abbey Road, and approved by Alan Parsons.
•The original album is presented for the first time ever in a 5.1 surround sound mix from the original multi-tracks by Alan Parsons at Capitol Studios, LA.
•3 CDs (the 1976 original mix, the 1987 remix, plus a whole CD of over 70 minutes of previously unreleased bonus material)
•5.1 surround sound BLURAY version of the album mastered by Alan Parsons June 2016, as well as a 96/44 HD mix
•2-LP set of the original 1976 recording, half-speed mastered by Miles Showell at Abbey Road, March 2016
•Stunning 60-page coffee table book with photographs and new interviews with Alan Parsons, Hazel and Sally Woolfson, David Paton and Stuart Tosh about the making of the album
•An original album poster, a replica 1976 press kit and tape-man sticker