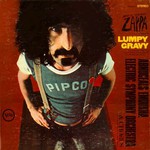 Zappa's first solo album, Lumpy Gravy is the work of Zappa the composer. Recorded at Capitol Studios in 1967 by legendary producer Nick Venet, Zappa's compositions were performed by the 50-piece Abnuceals Emuukha Electric Symphony Orchestra, which included several musicians from the legendary Wrecking Crew. Armed with the session tapes and a razor blade, Zappa sat in his New York City apartment and pieced together a masterwork that included the use of tape collages, dialogue, parody, musique concrete and DADAist tendencies. The self-produced album became one of his personal favorites. The LP is pressed on 180-gram vinyl from a pristine 1968 analog safety tape found in Zappa's vault.