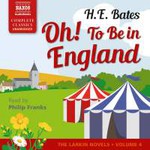 In the third sequel to The Darling Buds of May, Charley and Mariette decide to get baby Blenheim christened, leading to a wholesale christening of all seven of the Larkin children. Chaos abounds as the vicar Mr Candy is run ragged by the naughty twins Zinnia and Petunia, and finds himself the object of desire for Pop's second eldest, Primrose. To top it all off, Pop buys a fair ground on a whim, and Mlle DuPont arrives to discover that Pop is not a Lord, nor does he live in a mansion. The result is a celebratory ending and a wonderful tribute to Pop's beloved countryside, with its 'nightingales and blackbirds, bluebells and primroses, haytime and high summer'. Perfick.

"God is dead-now what? Amplifying his earlier volume THUS SPOKE ZARATHUSTRA, German philosopher Nietzsche criticizes, among other things, Christian moral precepts and the belief in the perfectibility of the human race. To him, concerns of good and evil are beside the point. He eschews making a logical argument, choosing instead to expound his ideas as aphoristic revelation. His hyperbolic style is not only difficult to translate but not always clear in the original language. Perhaps that's why this production interrupts the text with extended glosses, some of which are as obscure as the words they attempt to explicate. Alex Jennings reads Nietzsche's text in a somewhat supercilious tone. Roy McMillan delivers the translator's elucidations with admirable attention to clarity. Both have agreeable, listener-friendly British voices." (Audiofile)