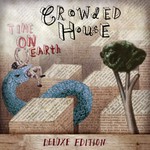 Each of Crowded House's six studio albums are now available as deluxe editions. Each body of work is expanded to include previously unreleased studio recordings, home demos, live tracks, b-sides and other rarities.

'Time on Earth' was the band's fifth studio album, produced by both Ethan Johns and Steve Lillywhite and released on 30 June 2007. The album was the first studio album since 1993, and marked the reunion of the band eleven years after they disbanded and featured new drummer Matt Sherrod in place of the original drummer, Paul Hester, who took his own life in 2005.