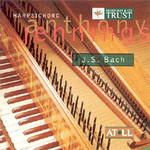 Transcription played an important part in Bach's musical apprenticeship. This album documents a recital of harpsichord music by Bach performed by the late and gifted harpsichordist Anthony Jennings. This album is the first of two recordings released after Jennings death. As this recording reveals, his performances are masterly and played with authority and superb musicianship.