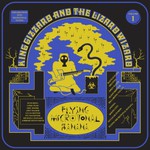 Flying Microtonal Banana is King Gizzard's first-ever experience in microtonal tuning, which features intervals smaller than a semitone and not found in customary Western tuning octaves.

Talking about the making of Flying Microtonal Banana, Eric Moore of the band said:

"Earlier this year we started experimenting with a custom microtonal guitar our friend Zak made for Stu. The guitar was modified to play in 24-TET tuning and could only be played with other microtonal instruments. We ended up giving everyone a budget of $200 to buy instruments and turn them microtonal. The record features the modified electric guitars, basses, keyboards and harmonica as well as a Turkish horn called a Zurna."

Shimmering, hypnotic and propulsive and powered along, as ever, by the metronomic beat of two drummers, Flying Microtonal Banana takes a subtle musical shift away from the frazzled freak-beat of its predecessor, Nonagon Infinity. Trance like, in parts clipped and concise yet deeply psychedelic, it reveals yet another musical side to a band seemingly in perpetual motion.

King Gizzard and The Lizard Wizard have a large presence over the student radio network, historically with 95bFM - this love only peaked following the release of Nonagon Infinity last year. Their lead single "Nuclear Fusion" has featured widely across the student radio network, as well as on Radio Hauraki. They played here just last month as part of the 2017 Laneway Festival!

"These floaty psych-funk grooves are more fun than a barrel of chimps, even if the lyrics fret about global warming, nuclear fusion and other harbingers of doom." - Record Collector ★★★★