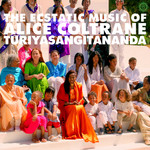 Alice Coltrane Turiyasangitananda's devotion to spirituality was the central purpose of the final four decades of her life, an often-overlooked awakening that largely took shape during her four year marriage to John Coltrane and after his 1967 death. By 1983, Alice had established the 48-acre Sai Anantam Ashram outside of Los Angeles. She quietly began recording music from the ashram, releasing it within her spiritual community in the form of private press cassette tapes. This Luaka Bop release is the first-ever compilation of recordings from this period.

This powerful, largely unheard body of work finds Alice singing for the first time in her recorded catalog, which dates back to 1963 and includes appearances on six John Coltrane albums, alongside Charlie Haden and McCoy Tyner, and 14 albums as bandleader starting with her Impulse! debut in 1967 with 'A Monastic Trio'. The songs featured on the Luaka Bop release have been culled from the four cassettes that Alice recorded and released between 1982 and 1995: 'Turiya Sings', 'Divine Songs', 'Infinite Chants', and 'Glorious Chants.' The digital, cassette and CD release will feature eight songs. The double-vinyl edition features two additional songs, "Krishna Japaye" from 1990's 'Infinite Chants, and the previously unreleased "Rama Katha" from a separate 'Turiya Sings' recording session.