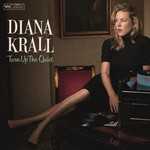 Diana Krall's new album celebrates a return to jazz and the Great American Songbook and reunites her with Grammy Award-winning producer Tommy LiPuma.

"I have thought about these songs for a long time. Being in the company of some of my greatest friends in music allowed me to tell these stories just as I'd intended. Sometimes you just have to turn up the quiet to be heard a little better."
Diana Krall is first and always a jazz pianist. This time out she is most determinedly the bandleader. She has chosen the repertoire, conceived the ensemble arrangements and gathered three distinct bands for these sessions.

"Turn Up The Quiet" is a co-production with Tommy LiPuma, producer of many of Krall's most acclaimed albums, including, "All For You," "The Look Of Love" and "Live In Paris." The record was once again peerlessly engineered and mixed by Al Schmitt at Capitol Studios in Hollywood, California.