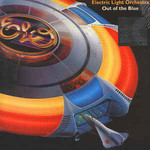 Electric Light Orchestra
Out Of The Blue (180g Double LP)

Out of the Blue is the seventh studio album by the British rock group Electric Light Orchestra (ELO), released in October 1977. Written and produced by ELO frontman Jeff Lynne, the double album is among the most commercially successful records in the group's history, selling about 10 million copies worldwide.

Turn To Stone
It's Over
Sweet Talkin' Woman
Across The Border

Night In The City
Starlight
Jungle
Believe Me Now
Steppin' Out