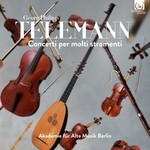 It has been said that Vivaldi wrote the same concerto 300 times. Could anyone possibly say that of Telemann? Not only do the specimens here feature every kind of weird and wonderful instrumental combination - four trumpets, three horns, two flutes and calchedon (a kind of lute), and even mandolin, harp and dulcimer; they also display the most amazing variety of styles, from Vivaldian exuberance to elegant Ancien Régime dances by way of learned German counterpoint. If you ever wondered where Bach got the idea for the Brandenburg Concertos, you could do much worse than explore the concertos of Telemann!

"It really is a varied feast...the Akademie für Alte Musik Berlin have added warm tonal brilliance and depth, bristling textures and a smartly nimble perkiness, and the result is a superbly colourful listen that ticks all possible boxes." Gramophone

"This scintillating disc should reassert his claim to be one of the most inventive composers of the 18th century...The Berlin Akademie für Alte Musik, celebrating its own 35th year, adds sophistication and a dash of edgy charm to the period instrument sounds." Observer

"2017 marked the 250th anniversary of Telemann's death. There were many fine releases including the 7 disc Telemann Companion issued by Harmonia Mundi, which included an excellent biographical essay. The single finest disc may well be this collection of concerti, which captures both the diversity of the composer's genius and his love of unusual instrumental combinations. This is bracing and inventive music at the highest level played by the world's best ensemble for the genre. It ranges from the elegant "Table Music" to riotous treatments of the fringes of the Baroque Style, with stylized Slavic dances and farcical French Court dances. Not to be missed by Early Music fans." AudAud Best of 2017