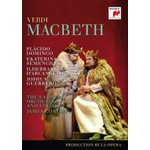 'LA Opera's latest production of Verdi s Macbeth (2016) features Plácido Domingo in the title role and Russian mezzo-soprano Ekaterina Semenchuk as Lady Macbeth. The opera is staged by Darko Tresnjak, who won a Tony Award for his direction of the Broadway musical A Gentleman's Guide to Love & Murder.

''When I was a young tenor, I loved playing romantic or heroic leading roles. When I began to add baritone parts to my repertoire six years ago, I was particularly interested in playing fathers, as I could draw from my own experience as a family man. Macbeth is a completely different kind of role for me. He is a murderer, but I think that he is also something of a victim, drawn into his crimes by the witches and by Lady Macbeth.'' Plácido Domingo''

"Though Domingo's voice lacks the baritone quality from which his role might benefit, there was no shortage in his volume at the production's opening night, and he acted the role brilliantly.

Russian mezzo-soprano Ekaterina Semenchuk's was also a triumph as Lady Macbeth. Though technically written for soprano, Semenchuk sang comfortably in her upper-register with exquisite technique, particularly in her Act I aria "Vieni, t'affretta! …Or tutti, sorgette." With a round, velvety timbre that is well-suited for Verdi repertoire, Semencheck is proof that strict vocal classification is merely a social construct.

The orchestra's work proved another highlight of the production. Although conductor James Conlon, celebrating his 10th year as L.A. Opera's music director, has an eclectic repertory ranging from Mozart to "Macbeth," it was clear he was in his element conducting this Verdi masterpiece." Variety

"Advancing age has done nothing but strew bouquets of honor, love and admiration on Plácido Domingo, L.A. Opera's general director, and on this "Macbeth," the company's first production of Verdi's first Shakespeare opera. No doubt an indefatigable 75-year-old Domingo required great will, upon learning of Lady Macbeth's death, to summon up the sound and fury for Shakespeare's famous line that life is a tale told by an idiot and signifying nothing.

Most baritones handle this as the decisive moment of profound resignation, the sealing of fate. Not Domingo, who is defying biological fate as no opera star before him. For him, the anguished utterance sounded an act of defiance signifying everything.

Six years ago he switched from tenor to baritone roles, and critics began complaining about his tenor ring, presumably providing less dramatic weight. Lately, in New York and London, there have been calls for him to finally retire from the stage after reportedly uncertain performances." L.A. Times