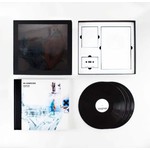 "Years removed from its source, its impact is multiplied tenfold. In 1996, it was a path towards adult-contemporary pop radio; today, it's an exquisitely faded Polaroid." - Pitchfork

Three 180gram black 12" vinyl containing all 23 tracks. The vinyl is housed in a hardcover book along with 40 pages of artwork and lyrics.

104 page notebook and a further 48 page sketchbook of artwork and notes.

'OK Computer' was originally released in 1997 and featured the singles 'Paranoid Android', 'Karma Police and 'No Surprises'. Widely regarded as one of Radiohead's most important albums, the LP was also nominated for a Grammy award in 1998 and was their first album to reach #1 in the UK.