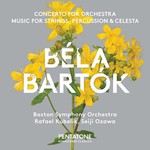 Béla Bartók's brilliant orchestral tour de force, the Concerto for Orchestra is coupled with his spine-tingling Music for Strings, Percussion and Celesta in these newly 'Remastered Classics' recording with the Boston Symphony Orchestra conducted by Rafael Kubelik and Seiji Ozawa. Bartók's at times breezily energetic Concerto for Orchestra was an instant hit on its premiere given by the Boston Symphony Orchestra in 1944 and it has remained popular ever since. It's a compelling work, bursting with Central European folk melodies, North African rhythms, shimmering harmonies and vivid orchestration that culminates in a strident final movement guaranteed to bring the house down. In a darker vein, Bartók's earlier Music for Strings, Percussion and Celesta is a powerful and eerily atmospheric work which has been used in film soundtracks to great effect, notably in Stanley Kubrick's The Shining. Rafael Kubelik recorded the Concerto for Orchestra several times throughout his career but it was this 1974 recording with the Boston Symphony Orchestra that has been singled out for especial praise, Gramophone magazine commending Kubelik's "sheer animal excitement and biting intensity ... with the rhythms pointed to bring out the wit, above all the peasant-like jollity … This is a performance to keep making you smile with delight." Although recorded in multi-channel sound, these memorable performances have previously been available only in the conventional two-channel stereo format. Using state of the art technology which avoids the need for re-mixing, PENTATONE's engineers have remastered the original studio tapes to bring the performances to life as originally intended: in compelling and pristine multi-channel sound.