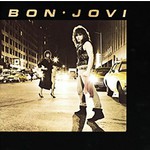 From the opening track, "Runaway," which rode to glory on E Street Band-mate Roy Bittan's distinctive keyboard riff, to the sweaty arena rock of "Get Ready," which closed the album, Bon Jovi's debut is an often-overlooked minor gem from the early days of hair metal. The songs may be simple and the writing prone to all clichés of the form, but the album boasts a pretty consistent hard rock attack, passionate playing, and a keen sense of melody. The prominence that keyboardist David Bryan (credited as David Rashbaum in the liner notes) gets on this record is an indicator, perhaps, that Bon Jovi had more than a passing interest in the pop market, which was then dominated by new wave and synth pop. Mixing Journey-like '70s rock ("She Don't Know Me") with shout-along stadium anthems ("Love Lies"), the self-titled Bon Jovi lay the foundation for the band's career, which reached its apex several years later with that very same combination of pop melody and arena-sized ambition.
All Music Guide.