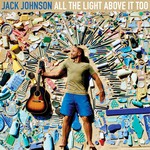 Jack Johnson
All The Light Above It Too

When choosing a title for his seventh studio album, Jack Johnson lifted a lyric from the opening track: a warm and wistful meditation on keeping perspective in frenzied times.

"All the Light Above It Too refers to the sun and how it shines in all directions," says Johnson, a Hawaii-based, multi-platinum-selling singer/songwriter. "It's easy to get overwhelmed by all the things happening in the world today, especially when a reality-TV host becomes our president. When my mind goes to that place of feeling like everything's falling apart, it's good to remember that there's this beautiful world and that it's not meant only for us-we're just part of a bigger experience, and we're so lucky to have that."

The follow-up to 2013's From Here to Now to You, All the Light Above It Too finds Johnson returning to the stripped-back, homegrown feel of the four-track recordings that launched his career over 17 years ago. "Whenever I listen back to demos or sketches for songs, there's a spirit there that I really love, even if it's just recorded on my laptop or my phone," he says. "This time around it was important to me to get the recordings down in a way that keeps that raw feeling from when the song was still fresh and new."

Produced by Johnson and Robbie Lackritz (Feist, Bahamas), the new LP came to life at the Mango Tree Studio, the home recording space where he's created each album since 2003's On and On. While his longtime bandmates accompanied him on several tracks, Johnson handled most of the instrumentation on his own, sculpting many of the songs around his graceful guitar performance. But despite the simplicity of that approach, All the Light Above It Too emerges as an album that's undeniably rich in both texture and emotion.