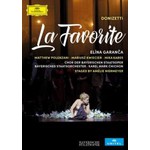 The premiere of the French version of Gaetano Donizetti's La Favorite at the Bayerische Staatsoper on 23 October 2016 was a memorable event and this is why:

To tie in with two further performances at the Bayerische Staatsoper on 26 & 29 July, Deutsche Grammophon is set to release this extraordinary production on DVD/Blu-ray, recorded live on 23 October 2016

The "fabulous Elīna Garanča […] sings beautifully and emotionally restrained, leaving the audience deeply moved during her dying scene", while Matthew Polenzani, in his debut as Fernand, scores with superb singing and acting, "reaching high tones with ease" (Süddeutsche Zeitung). Mariusz Kwiecień "convinces with the proper dandified arrogance and impressive acting", while conductor Karel Mark Chichon completes the musically fantastic performance by "getting the most out of the Bayerische Staatsorchester, impressively bringing out the dark, viscous sounds of the score and following the soloists with great intuition." (BR Klassik)

"Elīna Garanča brought her beautiful line to the role of Léonor, the voice quite seductive from smoky bottom to big and penetrating top. The way she rode the ensemble in the Act 2 finale was glorious to hear. Her 'ô mon Fernand' was dispatched with a gorgeous legato and also genuine agility when required. Yet despite that, she left me cold and for me, even though she sang beautifully, the impact was dampened by her foggy diction. It seems Garanča privileged the line over the text and while she really did spin some beautiful lines, I longed for her to do something with the text, to sing with it and not over it. I kept hearing an Eboli in that voice tonight and I look forward to following Garanča's career with attention." Opera Traveller