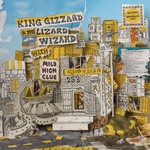 Sketches Of Brunswick East is a collaboration between King Gizzard and Mild High Club, the Los Angeles based tripster troupe led by Alex Brettin, who put out one of 2016's deepest listens, Skiptracing. The two bands formed a strong friendship touring together throughout the USA, Europe, and Australia.

Sketches Of Brunswick East is a soothing balm of a record; an aural salve to be tenderly applied to the world's damaged collective psyche. It is a chance to show their sunny, playful side. Where previous albums have slipped down sonic worm-holes to explore distant galaxies, this one is an examination of (and homage to) the Melbourne suburb in which King Gizzard write and record in their own studio, and from where they run their planet-spanning psychedelic operation.