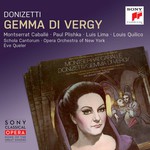 Another great coloratura artist, Montserrat Caballé, is heard in another prodigious Donizetti role, Gemma di Vergy, probably the most demanding he ever wrote for the soprano voice. It remained immensely popular in Italy during much of the 19th cen-tury. In Caballé's 1976 live recording, never before released on CD, the "floated, ethereal tone for which she is renowned" was acclaimed by Gramophone, as was the conducting of the ever-resourceful Eve Queler, who with her Opera Orchestra of New York was responsible for reviving numerous undeservedly forgotten masterpieces.