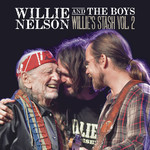 Vinyl LP pressing. 2017 release from the country music legend. Following in the musical footsteps of 2014's December Day, Willie Nelson and the Boys is another family collaboration, this time showcasing Willie and sons, Lukas Nelson and Micah Nelson, performing a selection of American country music standards and classics, including seven penned by Hank Williams Sr. Consisting mainly of studio recordings laid down during the 2011 sessions for Heroes, Willie Nelson and the Boys (Willie's Stash, Vol. 2) is produced by Willie's longtime friend and collaborator Buddy Cannon and recorded at Pedernales Recordings Studio in Austin, Texas. Includes Move It On Over', 'Healing Hands Of Time', 'Your Cheatin' Heart' and many others.