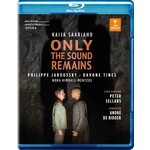 This DVD and Blu-ray derive from the world premiere performances, at the Dutch National Opera in 2016, of Only the Sound Remains, a Japanese-inspired double bill by Kaija Saariaho. Her first opera, L'Amour de loin, has captivated audiences around the world, and she composed Only the Sound Remains with the ethereal tones of Philippe Jaroussky in mind. Appropriately, the French countertenor plays two supernatural characters, an angel and a ghost. The fisherman and priest who encounter them are both sung by baritone Davone Tines, while the production is the work of the celebrated director Peter Sellars.