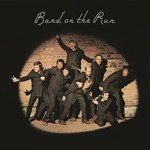 Band on the Run is generally considered Paul McCartney's strongest solo effort. The album was also his most commercially successful, selling well and spawning two hit singles, the multi-part pop suite of the title track and the roaring rocker "Jet." On these cuts and elsewhere, McCartney's penchant for sophisticated, nuanced arrangements and irrepressibly catchy melodic hooks is up to the caliber he displayed in the Beatles, far surpassing the first two Wings releases Wild Life and Red Rose Speedway.

The focus found in Band on the Run may have to do with the circumstances of its creation: two former members quit the band prior to recording, leaving McCartney, wife Linda, and guitarist Denny Laine to complete the album alone (with Paul writing, producing, and playing most of the instruments himself). The album has the majestic, orchestral sweep of McCartney's Abbey Road-era ambition, with a wide range of style-dabbling, from the swaying, acoustic jazz-pop of "Bluebird" and the appealing, straightforward rock of "Helen Wheels," to the wiry blues of "Let Me Roll It" and the swaying, one-off pub singalong "Picasso's Last Words (Drink to Me)."