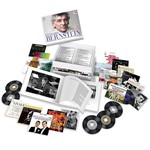 On the eve of his centenary in 2018, Sony Classical releases the most important collection, Leonard Bernstein's classic American Columbia recordings, remastered from their original 2- and multi-track analogue tapes. This has allowed for the creation of a natural balance (for example, between the orchestra and solo instruments) that brings the quality of these half-century-old recordings, excellent for their time, up to the standards of today's audiophiles. In addition, there has been a meticulous restoration of some earlier masterings in which LP surface noise was too rigorously eliminated at the expense of the original brilliance.

This is unquestionably the most comprehensive display of the legendary American conductor's unparalleled dynamism and versatility ever offered in a single package. Many of Bernstein's most memorable and critically acclaimed interpretations are brought together here.

Space permits only the mention of highlights, but they will give you a sense of the breadth and depth of this astonishing new set. There are his two classic complete opera recordings with the Vienna Philharmonic: Verdi's Falstaff (1966) starring Dietrich Fischer-Dieskau and Strauss's Rosenkavalier (1971) with Christa Ludwig, Gwyneth Jones, Lucia Popp and Walter Berry. Plus, his incandescent complete 1966 Haydn Creation from New York. Bernstein's New York Philharmonic recordings that launched the "Mahler Renaissance" in the 1960s are here, of course, including the 1961 Third Symphony which has arguably never been surpassed. Ditto for Carl Nielsen, whose great works Bernstein brought to a wide new public with interpretations like the 1962 NYP recording of the Fifth Symphony, perhaps the most thrilling account of this 20th-century masterpiece ever committed to disc. The Sibelius Fifth recording from 1961 is another celebrated Bernstein reading. And while we're talking about Fifth Symphonies, Bernstein's Beethoven Fifth from 1961 is still as electrifying now as it was then. His talk about the work is also included, one of many treasurable spoken-word commentaries in this set delivered by one of classical music's most charismatic and influential lecturers and teachers. Naturally there's Mahler, Nielsen, Sibelius and Beethoven in the new collection, not to mention Bach and Vivaldi, Haydn and Mozart, Schubert and Schumann, Berlioz and Liszt, Brahms and Bruckner, Dvořák and Smetana, Bizet and Offenbach, Tchaikovsky and Rachmaninoff, Saint-Saëns and Poulenc, Grieg and Fauré, Stravinsky and Hindemith, Bartók and Berg, Ives and Copland, Prokofiev and Shostakovich, Richard and Johann Strauss - symphonies, overtures, symphonic poems, dances, choral and vocal works as well as countless great concertos with soloists like Isaac Stern and Glenn Gould, not to mention Bernstein himself in Gershwin's Rhapsody in Blue.