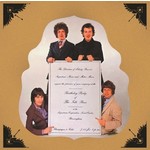 In 1967, The Idle Race were the first major signing by the new British arm of Liberty Records. The group were well received by the music press for their melodies, whimsical lyrics, and inventive production. They often appeared on the same bill with such bands as The Spencer Davis Group, The Who, Small Faces, Pink Floyd, The Moody Blues, Status Quo, Tyrannosaurus Rex, Yes, Free, and The Move.

Influential BBC disc jockeys such as John Peel and Kenny Everett were big boosters of the group. But despite critical respect and famous admirers such as The Beatles and Marc Bolan, The Idle Race (fronted by Jeff Lynne of Electric Light Orchestra fame) failed to catch fire with the public.