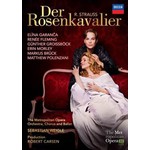 This is Renée Fleming's last ever performance of the Marschallin, one of her signature roles, as performed at the Metropolitan Opera following a run at London's Royal Opera House earlier this year.

This new and notable production sees Robert Carsen update the setting to Vienna in 1911, the year of the opera's premiere.

"The dramatic chemistry between Ms. Fleming and Ms. Garanča came through in their every exchange" New York Times