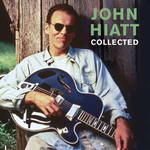 John Hiatt, who the Los Angeles Times calls "â€¦one of rock's most astute singer-songwriters of the last 40 years," has built a steady body of work, which more than earns to be captured on this Collected album.

This Collected 2LP captures his many highlights, think "Memphis In The Meantime", "Georgie Rae", and features tracks from his early days up to his critically successful days in the 80s and 90s and beyond.

180 gram audiophile vinyl
Gatefold sleeve
4 page booklet with liner notes and photos
Selection of songs, includes "She Said The Same Things To Me", "Memphis In The Meantime", "Have A Little Faith In Me", "Dust Down A Country Road" and many more