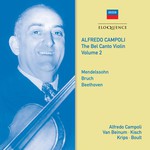 One of the most significant violinists in gramophone history, Alfredo Campoli enjoyed tremendous success in the 1930s as a purveyor of light music, both in concerts with his own salon orchestra and on Decca. A series of six 2CD reissues from Eloquence focuses on the violinist's postwar reinvention of himself as 'Campoli', the classical soloist.

For many music-lovers of the 1950s, Mendelssohn's Violin Concerto was almost synonymous with the name of Campoli. The concerto appeared on his programs more than any other work, from the time of his debut in 1923 to his final major appearance at the age of 74 when the critic of The Strad remarked that this 950 th performance sounded both 'fresh and mature'. Accordingly, he made two recordings: firstly with the London Philharmonic Orchestra under Eduard van Beinum in 1949, shortly after Decca had announced its technological breakthrough known as 'Full Frequency Range Reproduction'. The second recording came out a decade later with the same orchestra conducted by Sir Adrian Boult. The Bruch recording dates from April 1951, and was first issued in company with Bach's D minor Solo Partita (now coupled on Eloquence with other Baroque repertoire, 4825175). The Beethoven Concerto disc was made at the end of the same year in the middle of Josef Krips's brief but important tenure as music director of the London Symphony Orchestra; the understanding between soloist, conductor and ensemble is notably closer and more sympathetic than on Campoli's later recording of the work with another London orchestra.

All the recordings in this series of 'Alfredo Campoli: The Bel Canto Violin' have been given new remasterings from original Decca sources. Invaluable context on both artist and repertoire is provided by new booklet essays from Campoli's biographer David Tunley. 'Campoli plays most beautifully - the finale, in particular, is accurate and brilliant in the extreme.' Gramophone, September 1959 (Mendelssohn/Boult) 'Campoli's playing gives me the impression of overhearing a musician of exquisite sensibility thinking over Beethoven's thoughts … he avoids all showiness and gives a reflective reading … Krips accompanies sensitively and the ensemble is excellent.' Gramophone, May 1952 (Beethoven)