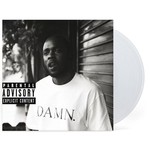 Kendrick Lamar releases a collector's edition of his critically-acclaimed record 'DAMN.' When the Compton rapper conceptualised his album, he originally envisioned the tracks in a much different order to how they ended up on the final product. Kendrick had originally felt that the track-listing should be the complete reversal of what it is - so that it began with "DUCKWORTH." and ended with "BLOOD."