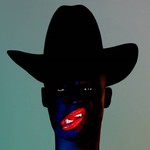 Now the Mercury Prize winners have confirmed their third album; something typically unique and exhilarating, but leaner, more muscular and self-assured than ever before.

Written and recorded throughout 2017 in the band's basement studio and HQ, Cocoa Sugar sees the Scottish trio, Alloysious Massaquoi, Kayus Bankole and Graham "G" Hastings, operating with a newfound clarity and direction and is without doubt their most confident and complete statement to date.

"You're always looking for the heartbeat of a film. For Trainspotting it was Underworld's "Born Slippy". For T2 it's Young Fathers. Their songs are my heartbeat for the film. And Only God Knows is that rush again. The ocean. The heart." Danny Boyle